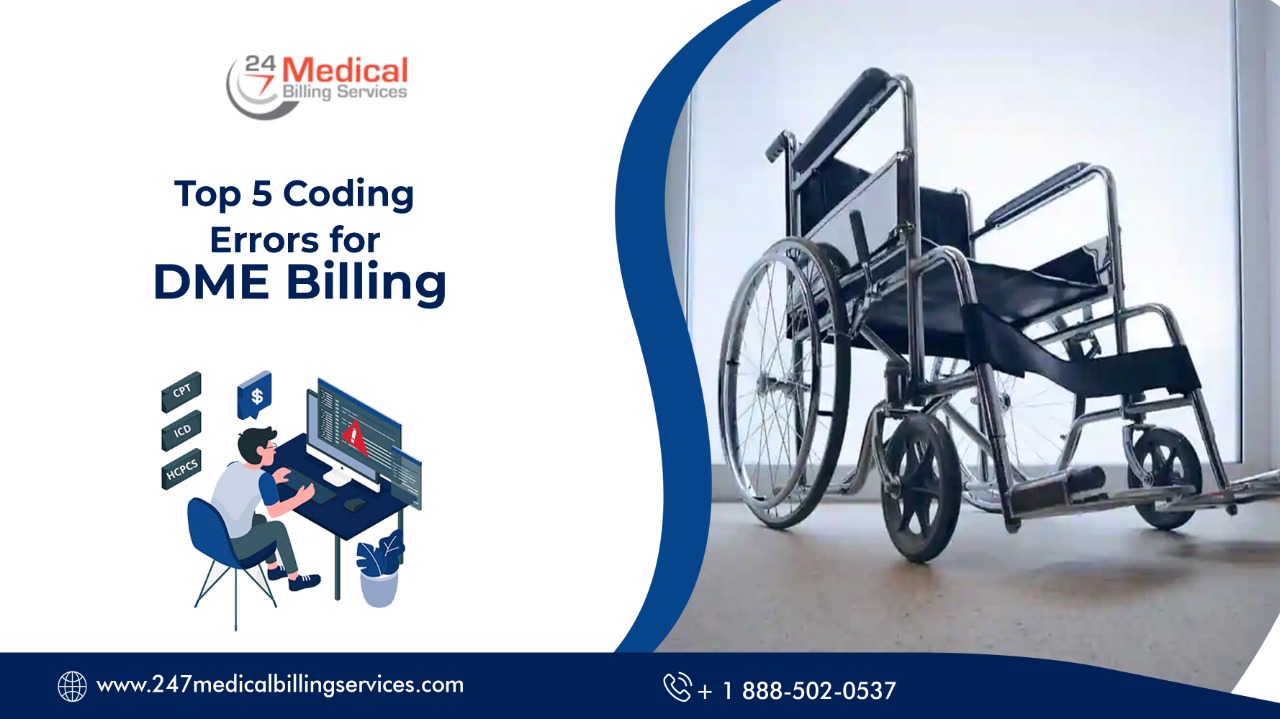 DME or Durable Medical Equipment is undergoing exponential growth with rising numbers in the aging population and increasing patients suffering from respiratory illnesses and sleep apnea. As such population grows along with the rise in pollution and unhealthy lifestyle; it is evident that the numbers in demand for DME will soar.

Along with this growth, the changes in DME billing continue, and it is one of the few billing systems that is quite complex. However, DME billing is far from being straightforward when added to the healthcare providers so that the practice revenues can increase.

In such a scenario with complex DME billing, it is quite predictable that as a physician you might lose billions or millions of dollars as revenue due to erroneous billing.

Here in this blog we will look into the top 5 coding Errors for DME Billing and other billing errors that lead to revenue loss.

The chances of getting reimbursed for the services provided in DME are pretty unlikely if the medical documentation submitted by the provider indicates a different code than the one billed. There are also cases where the services are provided by someone else instead of the billing provider. Or the service given is billed but unbundled. The billing codes are erroneous; hence, the claim will be rejected.

If the patient has been discharged from a different facility and the coded claim states about another facility, the billing will also be viewed with the error of wrong coding and eventually get rejected.

Apart from these, there is several other factors lead to revenue loss in DME practice and are counted as one of the major causes of coding errors.

Here are the top five errors in DME coding:

In addition to the above coding errors, there are few other DME billing mistakes that can often prove quite costly for your practice. Some of these errors which DME billing usually faces and can be easily mitigated are:

Often, small mistakes such as the error in the name of the patient provided by the CMS or insurance provider can lead to claims denial. Hence, it is of utmost importance that the patient’s details are verified and cross-checked not only before providing the service but also before submitting the claim.

When the service provided fails to showcase the medical necessity in the documentation set by the Medicare coverage and other insurance providers, the payment is bound to get rejected.

The insufficient documentation includes the failure to price the services provided. It can consist of a range of issues such as:

Insufficient documentation has been one of the plaguing problems in DME that causes low or no reimbursement to your practice. However, it remains one of the critical lapses among healthcare providers.

Unless the providers offer the correct codes, modifiers, and other necessary documents, it will lead to DME claims denial. The DME facilities also need to keep abreast with the changing CMS regulation, rules, and policies to manage their claims successfully.

How to get Error Free DME Billing?

One of the most viable options to ensure error-free DME billing is investing time and money in training your staff with the latest DME rules and regulations and updating the system with the latest RCM tools. However, it can still be a faulty method at times.

So the other best way out is to Outsource DME billing to a competent and knowledgeable medical billing company such as 24/7 Medical Billing Services. They have been helping DME practices with improved RCM from decades with their end-to-end medical billing and coding solutions. You can also be assured that there won’t be any coding errors in your DME billing with 24/7 Medical Billing Services.

Read more: DME Billing Services – What To Expect In 2022?