Why Physicians Need To Prioritize Billing and Coding Errors? 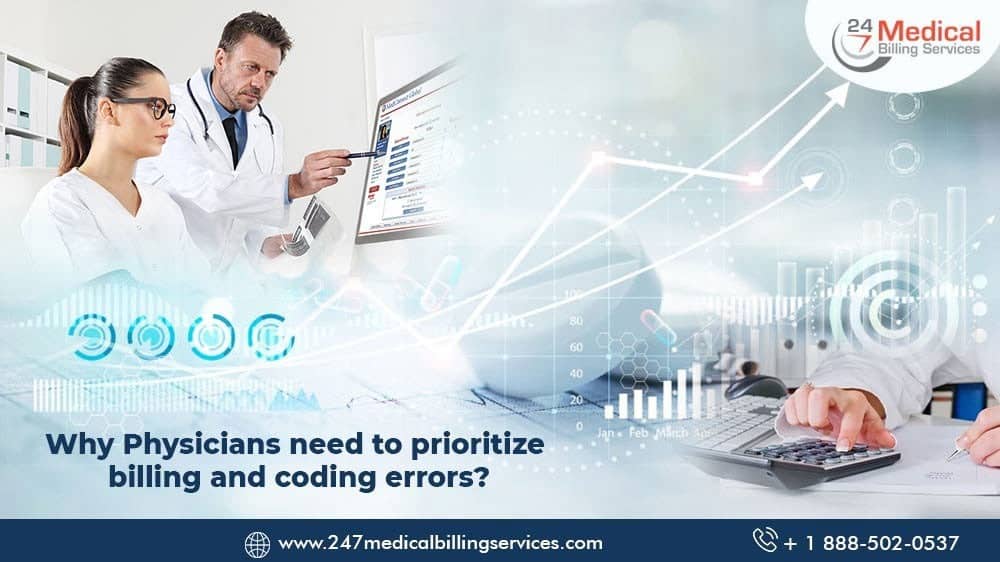 In the process of mitigating the risk of loss of revenue, solo practitioners (mainly physicians) end up spending more time with the management tasks such as medical billing and coding. The result is they are unable to take in more patients. In many practices, the physician is the sole person responsible for choosing the correct codes to compete for the notes as part of the documentation process for a visit.

The burden of medical coding and billing for the services rendered by the physician while caring for the patients often results in incorrect coding and billing, drowning the practice. Unfortunately, many fail to realize such issues’ damage to the facility until it’s too late.

The medical coding errors can potentially cost the practice thousands of dollars lost in revenue. Also, high denial rates compromise patient care, and there are more serious issues that a physician can face when they fail to prioritize the billing and coding process.

Some issues can arise when medical billing and coding errors are not avoided in practice are as follows:

Getting Scrutinized For Fraud

Often a history of incorrect coding by a physician where upcoding happens even by mistake, the practice can come under intense scrutiny. The scrutiny done by the governing body is for medical fraud and abuse, and the practice can face severe penalties and fines. The extent of which can be closing the practice or being blacklisted.

Medical abuse or fraud is associated with claims that have been falsified either deliberately or by mistake, resulting in the practice’s monetary gain. When wrong claims are made even unintentionally for an extended period and for many patients, it will be considered medical abuse and fraud. Submitting any incorrect claims to the insurance agencies, including Medicare and Medicaid, violates the Federal Civil False Claims Act (FCA).

As mentioned earlier, wrong coding and billing can result in claims getting rejected, denied, or receiving partial payment. Often insurance companies state that any claim that is denied cannot be repaid. Majority of the time, the denials result from missing information, inadequate coverage reporting, or other documentation errors.

However, reimbursement can happen with rejected claims, but the claim needs to be corrected and then resubmitted to the insurance company.

Both claims denied and rejected are often the result of untrained staff. With the ICD-10 codes being quite confusing, the medical billing becomes a challenge creating a long and short-term revenue issue.

Any physician must keep its revenue flowing and stop the denials and rejections to ensure the practice thrives. So, the more you have correct billing and coding in place a practice will notice the patterns where the errors are occurring, which they need to correct.

However, correcting and staying at the top of the changing rules and regulations regarding billing and coding is essential.

Some Common Mistakes Made In Coding and Billing

When you are a physician practicing in a small or independent facility, often these are some of the common errors that can happen that cause claims to be rejected or denied. You need to ensure that these mistakes are avoided.

The Importance of Medical Coding In Billing

Medical coding is the process in your practice where the services you offer to a patient as a physician becomes billable revenue. Since each service offered has its corresponding Current Procedural Terminology (CPT) and codes related to the Healthcare Common Procedure Coding System, they must be appropriately mentioned.

The physician needs to submit proper CPT and the codes for the claims of the services to Medicare, Medicaid, and other insurance companies for payment. Failure to quote the correct codes will cause denial delay or partial payment of the reimbursement amount. This can lead to the practice of building up a cache of delayed or denied reimbursement with loads of paperwork. The situation can quickly become stressful for you, but there is an immense loss of revenue in practice. Eventually, it might lead to you having to close the service.

Any miscoding for a procedure can create a difference in payment between $10 and $10,000. However, it is not only the loss of money, but the loss of reputation can also happen due to incorrect medical billing and coding.

How To Ensure You Get Paid For Your Work?

As a physician, we know you are swamped with patients and treating them. This gives you very little time to take care of the medical billing and the coding process without compromising your time with the patients. Many things need to be taken care of when it comes to correct medical billing and coding. Also, keeping a staff looking after the billing procedure can be expensive as a small practice. The answer to all these woes is to hire an experienced third-party billing and coding company like 24/7 Medical Billing Services.

The company has dedicated staff to oversee all the coding and billing. They also uphold the knowledge of the latest changes in the system. Furthermore, they have revenue cycle management that can ensure you are never bleeding money and the claims are always full proof. They also have the option to scale the system as your practice grows.