5 Billing Issues That Affect Revenue for Your Optometry 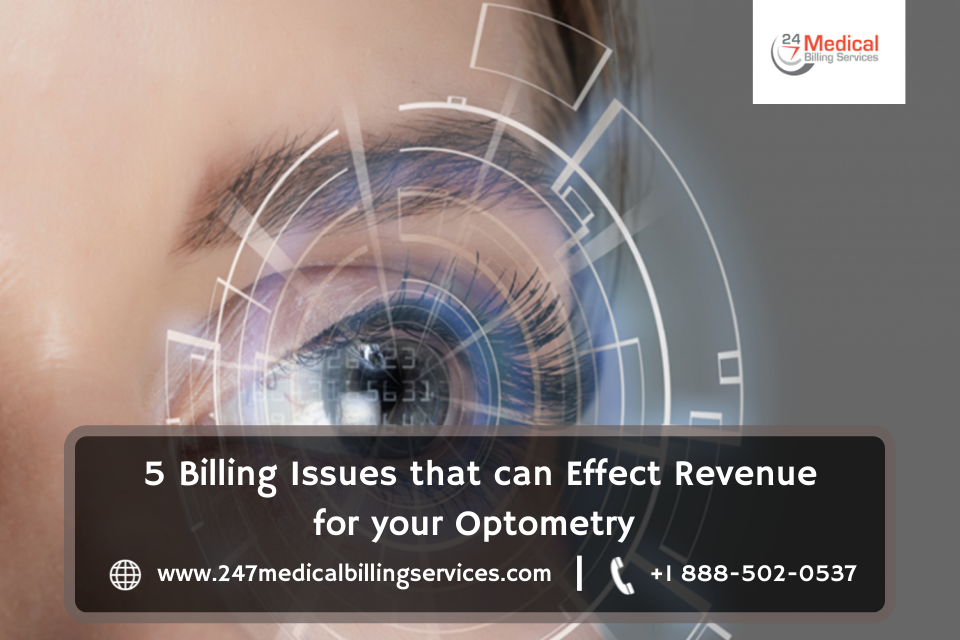 Healthcare offices and practices are often overloaded with work and many common mistakes can easily happen here. To reduce these, medical billing comes in handy. The coding should be done by the Optometrist as he is the one who is well-educated about the ethical coding procedures. He is responsible for ensuring the usage of correct office visit codes and the claims to be correctly coded. In optometry, there are around 16 ways to code eye examinations except for consultation visits.

But billing is best handled by staff or outsourced people who are trained, billing specialists in optometry. However, there still can be billing issues that can hamper your revenue and can invite unfortunate results like a denied claim or an audit. Below are the most common billing issues which you need to know and avoid timely.

Understand the difference between routine and medical exams well to ensure you get the full reimbursement for your services. The chief complaint and diagnosis can help you in that. It will most likely be billed as a medical exam if the primary diagnosis is medical but addresses the chief complaint. Also, remember to never assume that a blurry vision means a refractive issue, as it can be the reason for an underlying medical condition that may result in a medical exam.

Choose the necessary exam elements and perform only those specific tests on the patient, rather than performing routine tests on each patient. A mix-up in this can incorrectly raise the exam code for that visit.

Modifiers help in describing a service accurately but can also lead to denied medical claims if used incorrectly. There are around 17 modifiers in optometry but below are some frequently used for eye exams:

This happens when a particular patient is billed double or more for the same treatment or test. The operator should be careful enough about whether the patient had already paid or not. This issue will increase administrative work and will be a pain for the payer too. It may also look like the patient has availed multiple services on that day.

Wrong billing could take place in multiple events such as if the patient had scheduled but canceled his/her appointment later, missing details in claims, or for something as small as incorrect patient details. You need to be careful about billing for the correct services like you can’t charge for a service like changing of contact lenses despite no injury to the eye.

These errors can cost you financially or your reputation. Billing errors may show more or less revenue than what you’re making and that will cost you hours of diagnosis to find a small issue. It also may invite unnecessary penalties for fraud, irrespective of how trivial the mistake is.

A few medical billing codes are specifically designed to be used for a group of procedures that are frequently carried out together. Unbundling is an illegal practice when these services are billed under separate codes. This can cause harsh consequences as it can increase the profits for the center.

This issue can be avoided by staying up to date on the coding trends and billing code changes that happen frequently. Stay updated to avoid legal issues later.

Upcoding can happen when a moderate (in terms of treatment and money) diagnosis is upgraded to a more serious and expensive treatment. It can also happen when a patient is charged for a service that was covered under Medicare, instead of an administered service. Both these situations can demand high payments than what you should receive.

Under coding is when a provider enters a billing code for a less expensive procedure to avoid an audit or to help a customer save his money.

Last but not the least, remember to follow up on your denied claims and not confuse them with rejected claims. Any optometrist must learn ethical billing and coding procedures and adhere to the optometry coding guidelines that change each year.

One best option to keep proper track is to outsource optometry billing tasks to someone.