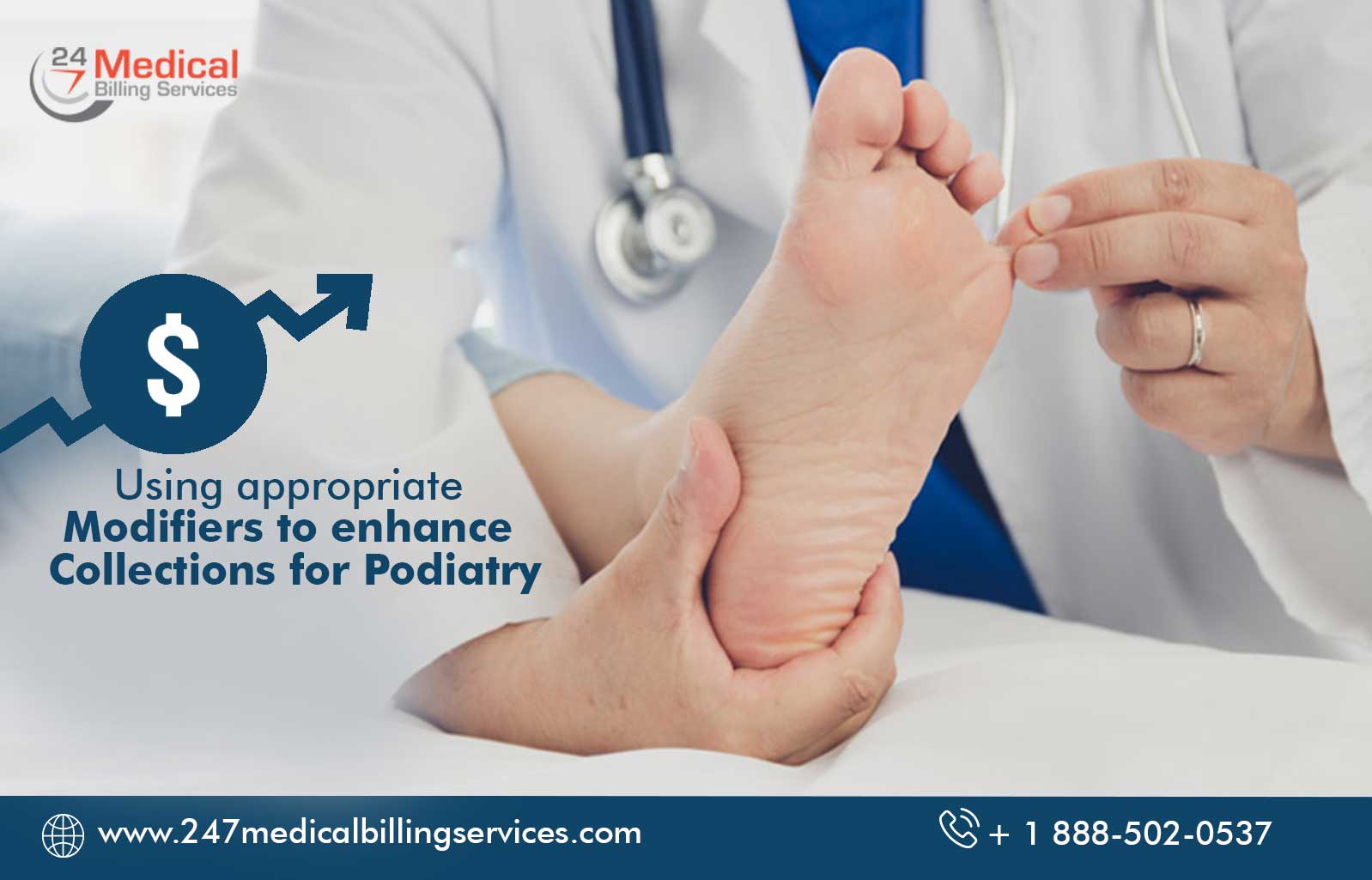 Podiatry is a specialized branch of medicine that deals with the study, diagnosis, and treatment (including surgery) of the ankle, foot, and other associated structures of the leg. As in other senses, podiatry also requires a regular flow of revenue to survive and sustain the practice. In podiatry practice, there are various modifiers for specific procedures with many insurances related rules which need to be followed in order.

For podiatry, coding is also complicated as the number of procedures carried out on the same organ or its structure leads to many codes used while billing for reimbursements. Thus, to boost collections, minimizing errors, and avoiding dwindling revenues, using precise modifiers is an absolute necessity.

‘Routine foot care’ is not usually reimbursed under Medicare. But, it can get reimbursed under a few circumstances like: The patient is suffering from a disease impacting on circulatory problems or lack of sensation in legs/feet, severe infections, warts, ulcers, wounds and their treatment, fungal treatment, and the metabolic presence metabolic, neurologic or peripheral vascular disease.

Note: Regular foot care includes treating corns and calluses (cut and removal), treatment on nails (cut, clip, and debridement), hygiene care, or other treatments not indicating any infirmity or injury.

Let’s take a look at the list of modifiers used in podiatry:

This is to be used where non-traumatic amputation of the foot or a part of the integral skeleton is diagnosed and treated.

Q8 is to be used where the absence of a posterior tibial pulse or dorsalis pedis pulse is observed, or in cases such as reducing or absent of hair, thickening of nails, changes in pigment, the texture of skin being thin/shiny or skin color becoming red.

This is to be used with the cases like edema, burning, paresthesia, temperature changes, or claudication.

Using the diagnosis code of the problem with a systemic condition diagnosis code, class find modifiers (as given above), and name and the UPIN of the referring physician with the apt (last) service date.

In podiatry, certain services may be carried out separately from other services/procedures. In a such case, the podiatry medical billers and coders need to be aware of how to use the CPT Modifier 59. This modifier was changed by Medicare to suit the NCCI (National Correct Coding Initiative) program. These procedures are not described/ documented along as they are not implemented on the patient on the same day by the same physician. The difference is because of the procedure, site, and session. It may be because of independently considered due to grazing, incision/excision, or wound. While using another modifier, the CPT modifier 59 must not be used. Again, to remove complications about modifier 59, new HCPCS modifiers were brought in by CMS. It’s important to note here that, coders must not use modifier 59 and the below mentioned ‘X’ modifiers’ attached with the same procedure.

XE – Separate Encounter: Belongs to a separate service due to it occurs separately.

XS – Separate Structure: Refers to a distinct service as it has been carried out on a different structure/organ.

XP – Separate Practitioner: Refers to a distinct service as it has been performed by a different practitioner.

XU – Unusual Non-Overlapping Service: Indicates a service that does not overlap with the main service or its elements.

A podiatric billing needs to use CPT codes 97112 and 97032, but together with the GP modifier and documentation recorded appropriately. This should also be combined with a ‘plan of care’ synopsis in the record.

Proper modifiers help in clear, timely, and appropriate billing for claims, reducing denials, and increasing collections. As podiatry needs various codes and modifiers, it is important that the podiatry coders are masters in podiatry coding.

Need a master in podiatry billing and coding? Visit www.247medicalbillingservices.com and discover our services.