Coding Updates for General Surgery Billing in 2021
Get Quote 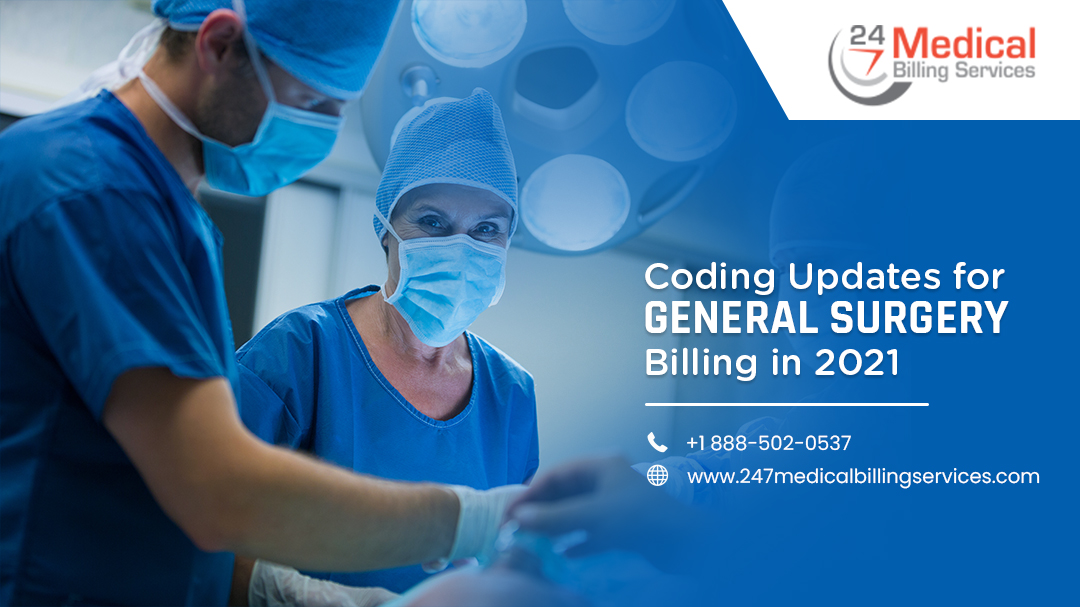 HCPCS or Healthcare Common Procedure Coding System describes medical systems, supplies, products, and services and facilitates Medicare and other insurers’ health coverage claims. An expert physician billing company will be up to date, including all the CPT, ICD, and HCPCS coding modifications to submit factual claims.

Integumentary System-Breast Repair and Reconstruction. For 2021, there were 15 codes updated and two codes deleted (19324 and 19366) in the breast repair and reconstruction subsection (19316-19499) of the Integumentary System section. Coders additionally will find new instructional guidance for each code and new fundamental guidelines in this subsection. The new guidelines give specified information of the types of reconstruction used to improve checks using several techniques, including latissimus dorsi flap; free flap (e.g., DIEP, fTRAM, SIEA) GAP flap); and single or pedicled transverse rectus abdominis myocutaneous (TRAM) flap.

The guidelines also explain if different reconstruction methods are performed on each breast. The code classifications have been updated: the title mammary was substituted with the term breast and now incorporates language to indicate if the breast implant insertion was performed on the same day or at a particular time as a significant mastectomy.

Respiratory System—Nose: Code 30468 is unique and was created to explain the repair of a nasal valve collapse with subcutaneous or submucosal lateral wall implants. It also required a code to recognize opening the nasal collapse via minimally invasive methods and using absorbable lateral wall implants. Parenthetical direction for code 30468 notes that this code is to be used to report a bilateral system. If the process is performed unilaterally, add modifier 52.

Respiratory System—Lungs and Pleura: Code 32408 is designed for 2021 to report core needle biopsy of the lung or mediastinum using all imaging guidance types, including, but not restricted to, CT, MRI, ultrasound, and fluoroscopy. The current guidelines for 32408 state that imaging guidance is not to be listed separately, and the code are only used once per lesion tested in a single session. If multiple lesions are tested on a corresponding day, select 32408 for each lesion examined simultaneously, including modifier 59.

Female Genital System—Cervix Uteri: Code 57465 is a unique add-on code generated to report computer-aided colposcopy to assist in the cervix’s biopsy. Code 57465 is used in combination with vaginal colposcopy procedures (57420, 57421) and cervical colposcopy procedures (57452-57461). The 57465 specification states that it combines optical dynamic spectral imaging that aids in the mapping of abnormal measures for biopsy.

Auditory System—Other Procedures: New codes are designed for dilation of the eustachian tube practicing the nasopharyngoscopy technique. This procedure is generally referred to as eustachian tube balloon dilation (ETBD). Before 2021, coders used unlisted code 69799 to report this procedure because no specific code was available. The information shows that 69705 is for unilateral dilation also 69706 is for bilateral dilation.

Conclusion There is a lot that goes into General Surgery Billing and Coding. In such a scenario, a group can opt for outsourced medical billing services, which will help them streamline their processes and focus on core activities. 24/7 Medical Billing Services is a distinguished medical billing service provider that can efficiently handle all your billing needs and claim settlements. For more information, call us at +1-888-502-0537.

Read More: The rise of General Surgery for the upcoming years!