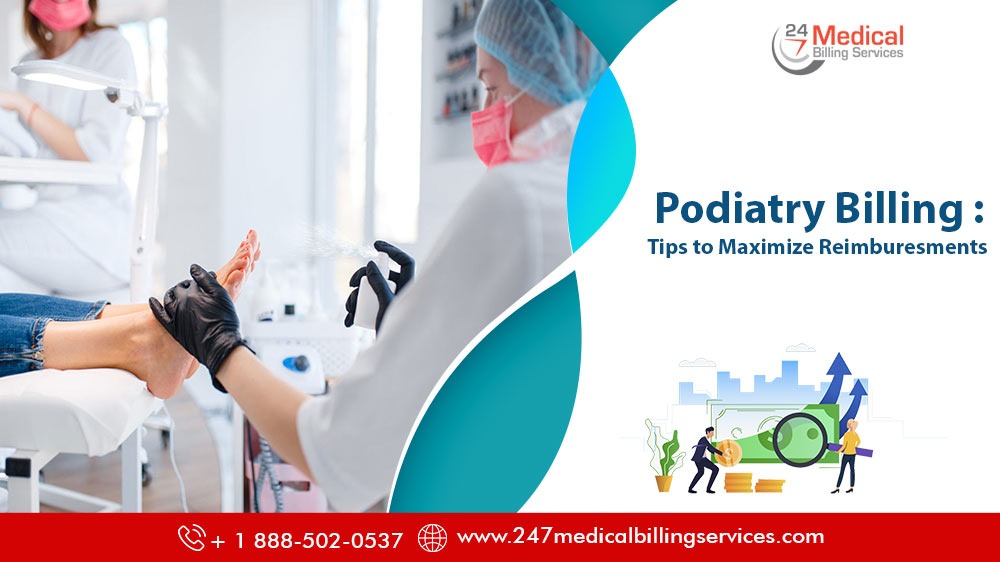 Did you know? Podiatry billing and coding involve quite a complex process right from the beginning of the appointment. The onus is on the practice to determine whether the patient needs it for medical reasons and prove that podiatry treatment is necessary. Moreover, there are quite a few nuances to podiatry coding, where meticulous attention is required in determining the correct modifiers and coding knowledge for any inclusive services and reimbursement in podiatry billing . The lack of knowledge of the correct modifiers means the practice will suffer from revenue leakage, aged accounts, and maybe even write-offs. Both CMS and AMA state that in podiatry billing and coding, modifiers are vital as it helps the insurance company to understand the procedure and service provided and performed.

It is just one of the few issues that can arise from incorrect coding and the inappropriate use of modifiers in podiatry billing. But there are ways to maximize the reimbursement in podiatry billing and ensure steady revenue. These are as follows:

One of the challenging areas in podiatry billing is using the correct code for reimbursement. The podiatry practice needs to use the closest code that suits the procedure performed on the patient. It is essential to use valid ICD-10 codes along with HCPCS and CPT.

In podiatry, there are six different ICD-10 codes, two HCPCS codes eight CPT codes. The podiatry coder needs to be efficient in changing the codes as per the coding guidelines and standards. Any mistake in submitting the claim with an incorrect code would cause the claim to get rejected, denied, or delayed.

Applying the correct modifier is another crucial factor in the claim form during the billing. The modifiers help in providing information about the procedure codes that were used on the date of the service. “Q” modifiers are typically used in podiatry billing to denote the different classes of findings, for instance, Class A (Q7), Class B (Q8), and Class C (Q9). Q7, Q8, and Q9 modifiers are used to indicate a patient’s condition in their findings. Q Modifiers can also be used for codes such as 11055, 11056, 11719, 11720, 11721, or G0127.

However, there is also a GX modifier referring to liability issued and a GZ modifier for any service or item that can be denied but is not necessary or reasonable. All the findings refer to different procedures, and the failure to use the specific modifier means loss of revenue.

Sometimes, a procedure might be required by the podiatry biller to work on a complicated patient condition, which means the coding can be more complex. In such a scenario, the coder needs to do the following:

If the insurer refuses to cover the claim or denies it, the podiatry practice won’t get paid for the service. The way to move forward to make a claim again is by going through the Explanation of Benefits (EOB) given by the insurance company. It will provide you with the reason for the claim getting denied. Address the issue that caused the claim rejection by checking the policy’s exceptions. Once the fresh appeal is made, the biller must confirm that the insurance company has received the claim and get the receipt. They also need to check online, track the claim, and follow it up for the next thirty days if required.

Using the correct modifier and submitting the claims on time with the proper codes means the chances of reimbursement in podiatry billing would definitely increase. But podiatry is a complex healthcare field, and submitting successful claims can be tricky, especially when the insurance company and CMS keep updating and changing the regulations. In such an instance, the best way to ensure that reimbursement are maximized is by working with an expert podiatry billing and coding company, such as 24/7 Medical Billing Services.